This post should be entitled 'slog' because that's pretty much the stage I am at with my craft room. However, as directed by Laura over at 'I'm an Organizing Junkie', and also because I promised you last week that I would, here is update two on the beast room.

I have been trying to follow Laura's PROCESS system for the space and heaven knows I needed strict guy lines (God knows I needed one of those too before I opened up the pocket doors and went into the room) guidelines. As per the afore mentioned organizing system:

PLAN: I planned to sort, purge and organize my craft room, evaluated that very little in the room was working except that I wanted to keep the sewing table with my sewing machine on top of it and keep the antique chair that I'd been using for sewing. I knew that I wanted to get rid of my drafting table and chair, despite DH's concerns about that. What wasn't working was the room being used (by me. This mess is ALL on me) as a dumping zone. Budget? None. It's a craft room for heaven's sake, if I don't have something I need, couldn't I just make it?

REMOVE ITEMS: I really liked this part. Really, really, really! I will ignore the fact that it took me three days to move everything into our small guest bedroom where I could close the door and keep the children away from all the bits and dangers likely lurking there. When all of the stuff was moved (less the sewing table, sewing machine, antique chair, drafting table and drafting chair), I was able to close the bedroom door. Just. Remove then sort and purge: I am still at this stage likely because I am doing it in conjunction with the next step, 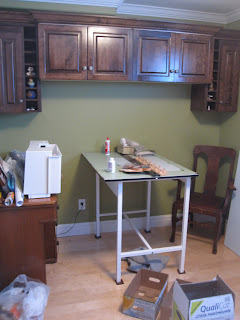 ORGANIZE INTO PILES: DH is going to find this one funny as he calls me the 'Pile Queen'. When things are out of order, I sort them into piles and then ignore them until they get so cumbersome that they need to be moved for child safety reasons. Therefore this stage is second nature already.

So, even after a month and a half, I am still sorting, purging and organizing. That being said, I am starting to move into the CONTAINERIZE stage as I am putting away (into those gorgeous cupboards and shelves and drawers) whatever makes it through the sort and purge stage.

One of the things Laura said in her suggestions for this challenge is not to purchase any other containers, etc until you know what you will need at the end of the sorting and purging. I have spent $5 on a piece of pegboard to put over my sewing table to hold my quilting rulers, scissors etc and have plans on making two spool racks for thread but not before this challenge is over as something else she stressed is the importance of making a clutter free space that is easy to maintain rather than concentrating on making it cute. The decorating siren's call is strong but I'm trying to resist. So far.

I also added a stipulation of my own to this project in hopes that it will help me maintain some semblance of a deadline: no using the craft room for projects while I'm organizing. I've only managed to ignore that rule once which is pretty impressive for me ;)!

Time is running out on this project. We do have company coming in June therefore the guest room has to be emptied by then. Happily, the guest room is now 50% emptied of the stuff I piled in there (which will likely come as a huge relief to anyone planning on visiting us who might need that room to sleep in).

Update Post Three will be next week as I'm extending my deadline again...to the end of May 2013.
Posted by Patty at 11:15 PM